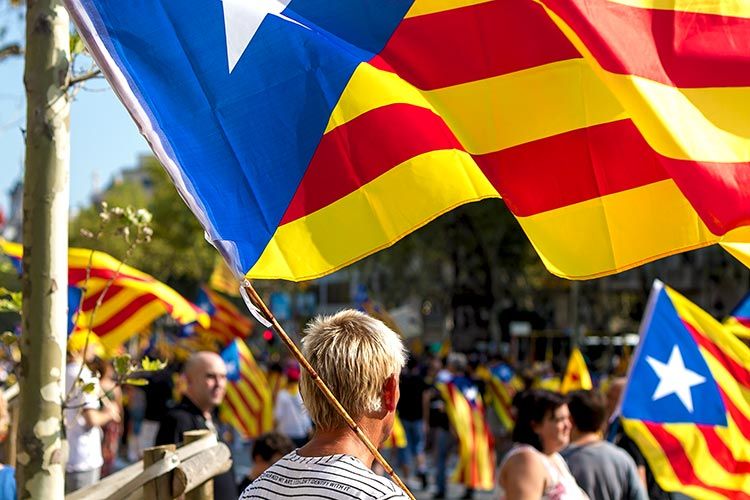 This week, on the 11th of September, Catalonia celebrates their national day... 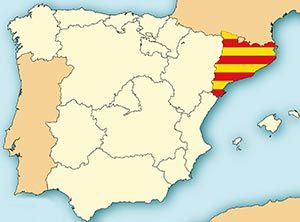 The last years there have been large celebrations and demonstrations in support for independence from Spain. Thousands of people are expected to take to the streets again this week and demand an independent Catalonia. For some people the Catalan fight for independence is not well known. Therefore, we thought we could explain briefly about Catalonia and the background for their wish for independence.

Catalonia consists of four provinces, Barcelona, Girona, Lleida and Tarragona. Barcelona is the capital and the largest city in Catalonia with 1,6 million people. In total, Catalonia has 7,5 million inhabitants. The Catalans have their own language, Catalan, which distinctive different from Spanish. They also have their own cultural history and traditions. 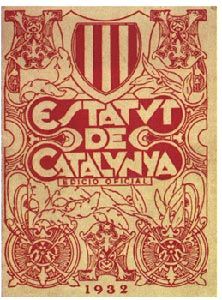 According to Catalans, they lost their independence in 1714. This is reflected even at FC Barcelonas home matches where the crowd starts shouting for «independència» every match after exactly 17 minutes and 14 seconds. In 1931 Catalan separatists won the elections and proclaimed the Catalan republic. Through negotiations with Spain they achieved a high degree of self-government until the Spanish Civil War (1936-1939). The Catalan self-government ended with the victory of General Franco and the fascists. Catalan language was banned, 200 000 Catalans went into exile and the president of Catalonia, Lluís Companys, was executed.

Franco’s death in 1977 allowed for the reestablishment of the autonomous government in Catalonia, and the Catalan president could return from exile. A new statute of autonomy, agreed by referendum in Catalonia and passed by the Spanish parliament in 2006, gave Catalonia increased autonomy. Catalan is the primary language in schools and in public services. Spanish is actually considered as a second language at school and is taught as much (or little) as English at public Catalan schools. In 2010, controversial Spanish court rulings limited the Catalan autonomy once again.

The last couple of years the support for independence has risen substantially. The financial crisis, which hit Spain with strong force, has been a contributing factor to this. Catalonia is one of the richest regions in Spain, and they believe they contribute more to the Spanish treasury than they get back. After the conservative party, Partido Popular, won the elections in 2011, tension has risen. They strongly oppose Catalan independence and the Catalan autonomy has been further limited. 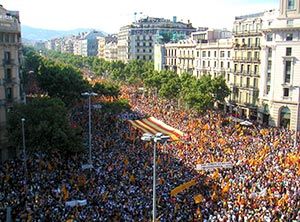 During the Catalan national day celebrations in 2012 and 2013 there were massive demonstrations. 1-2 million people were in the streets demanding independence for Catalonia. The local authorities have tried several times to hold elections over independence, but Madrid refuses any dialogue concerning this issue. According to the Spanish government, the demand for a referendum over Catalan independence is against the constitution. In 2014, local authorities in Catalonia chose to hold a non-binding referendum over independence. 2,3 million people gave their vote. 80% voted in favor of independence, 10% in favor of a federal state, and 4,5% against independence. The referendum was not recognized by Spain, and now several of the leading authorities behind the elections are facing prosecution, including Catalonia’s president Artur Mas.

27th of September, the Catalans once again go to the polls. The president has called early elections, and the separatists claim this is a de facto referendum on independence from Spain. Several of the main political parties supporting independence have made a coalition called “Junts pel Sí”, which means “Together for Yes”. If they win a majority in the local parliament elections, they start creating a constitution for Catalonia and eventually declare independence from Spain. Spanish authorities on the other hand, look at the referendum as ordinary local elections. They have vowed that Catalonia will never achieve independence from Spain. The tension is high. According to polls, «Junts pel Sí» will most likely win a majority in the parliament, but receive less than 50% of the votes. There are exciting times ahead for both Catalonia and Spain.

Here you can read more about Catalonia’s fight for independence...